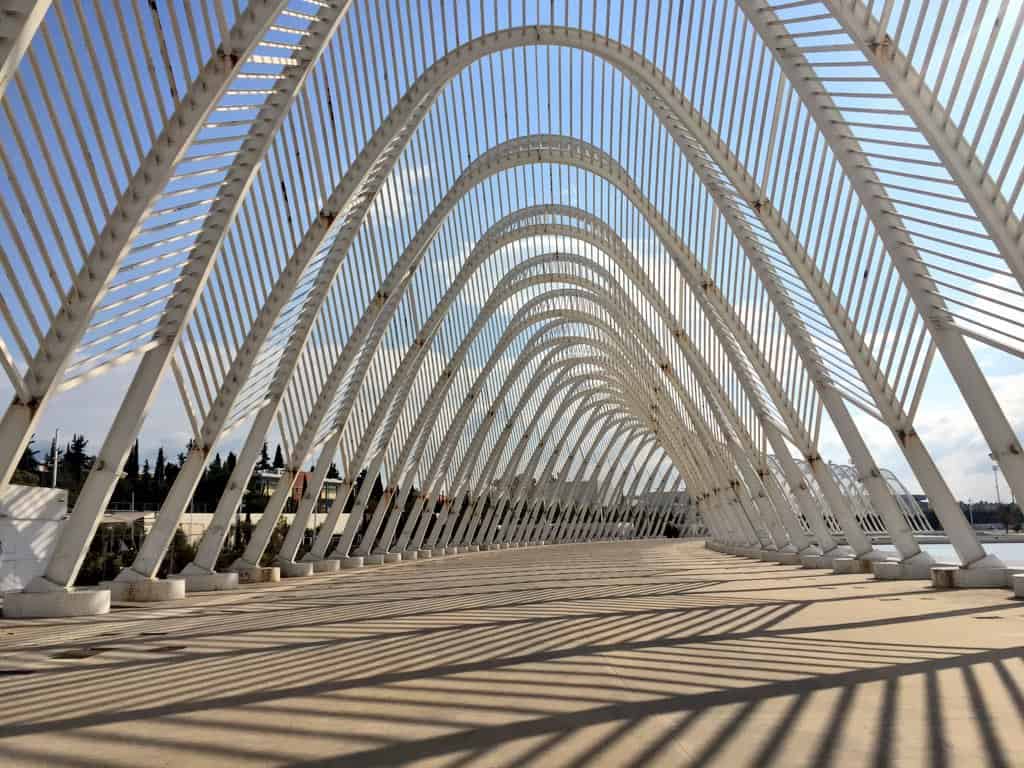 Continuing a tradition of study tours organised by the British Group, a number of us arrived in Athens for an early start on Friday 12 October 2018. Greece offers amazing opportunities for comparing recent works with the ancient. Professor Yanis Ermopoulos showed us around the 2004 Olympic site. Calatrava’s work links the parts. It was particularly effective in the unusual open frameworks of the entrance canopies and the Agora. Later, we went round the Panathenaic Stadium in the centre of town. The configuration dated from ancient times but it had been rebuilt for the 1896 inaugural Olympics of the modern era. An open-ended arena for 80,000 seemingly carved from a single material, stone. Its simplicity was a compelling counterpoint to the morning’s visit. For lunch Professor Ermopoulos took us to his university where we saw current lab experiments and met some of his colleagues and the chair of the IABSE Hellenic Group, John Sigalas. We had plenty to discuss on the differences between our two National Groups. We also managed to visit the Stavros Niarchos Foundation Cultural Centre, a masterwork of Renzo Piano, slid under the ramped up surface of the adjacent park. On Saturday our bus took us most of the way across the Peloponnese. Professor Paul Marinos explained how seismic issues had dictated the form of the motorway out of Athens and gave us a geology lesson when looking at the Corinth Canal. It is another example of an extraordinarily simple concept from antiquity, a 6 km slice through Greece with near vertical sides (much at 5:1) up to 79m high. Emperor Nero had made a good start on construction but it wasn’t completed until 1893! Sadly, because of its 22m width, it is not much used today. Our destination was the 2252m long Rion-Antirion Bridge (opened 2004), a work that conquers extremes of seismicity (peak ground acceleration of 0.48g), water depth (65m) and soft ground. It is designed to accept movement ranges laterally at the piers of 3.5m and longitudinally at the ends of 5m. We were taken to the nearest pier where we saw the configuration of hydraulic restraints that make this possible. On our final day we were walking between piles of numbered stones on the Acropolis. Restoration of this most iconic site continues and all is explained in the excellent new museum (architect Bernard Tschumi) adjacent to it. So much to see, so many contrasts to absorb, so many conversations, so many thanks to our hosts and so many, many thanks to Elina Efthymiou of the British Group who organised it all.

The wife’s perspective on a great trip! As a non-engineer, I loved scrambling over bridges, terrorising Professor Marinos by standing too close (at least 2 metres) from the edge of the Corinth Canal, absorbing the amazing visual tale of the various construction phases of the Rion-Antirion Bridge – but what I really loved was the amazing courtesy and charm and patience of my Airbnb host when we managed to lock the keys inside the apartment; the fantastic food (pure ingredients food – my favourite), and the extraordinary disjunction between modern and ancient Athens. Particularly memorable was the superbly urbane and knowledgeable guide who introduced us to the Acropolis and who told of the long cultural abyss in Greece’s history that somehow I had failed to appreciate the length of. The sheer breath-taking wonder that I experienced at the quality of the art and architecture that I had only seen repetitive echoes of in much later work in other parts of Europe. Also memorable was the unstinting care with which the whole group’s needs were met by our leaders Elina and Kostas.