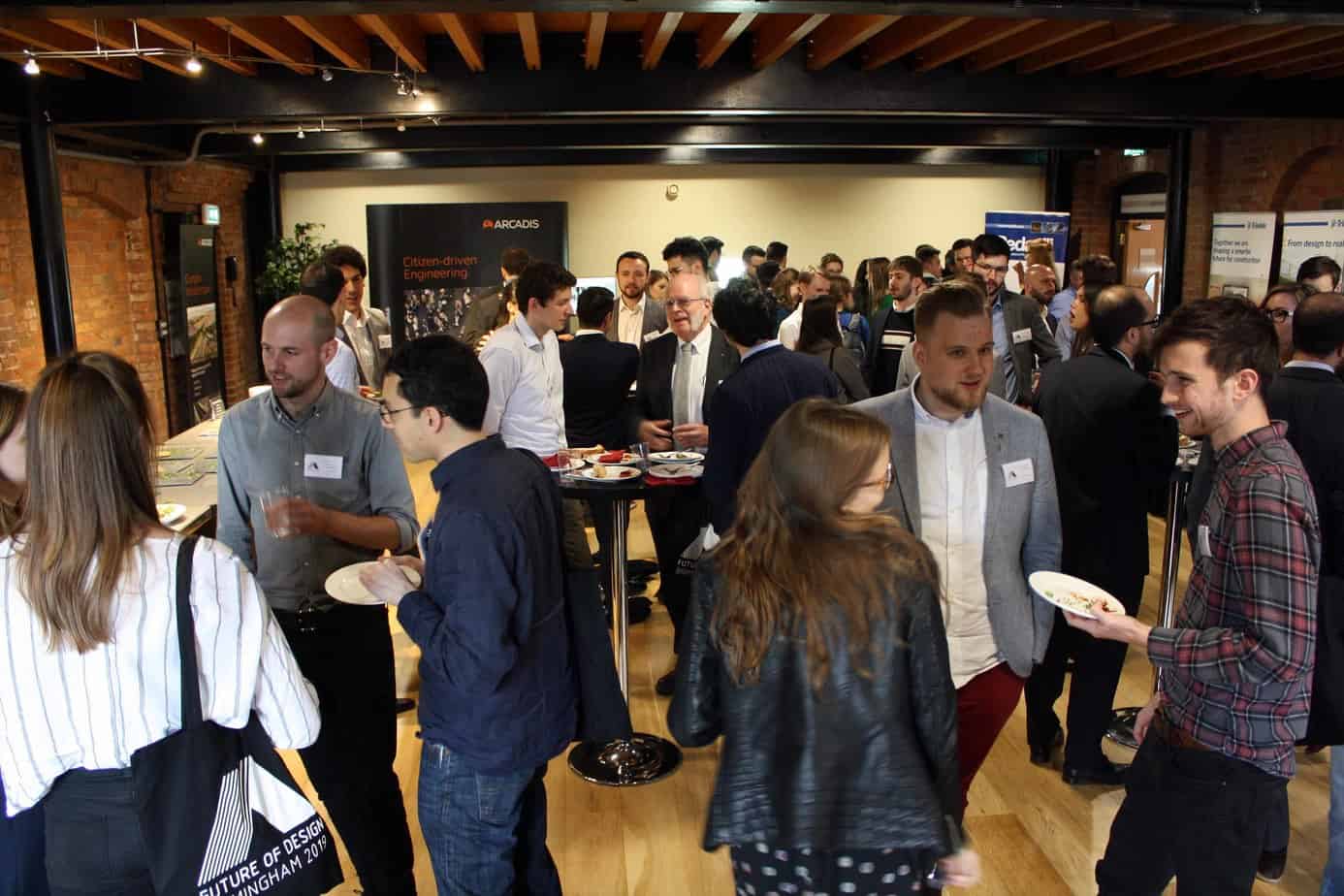 Arup’s Rebecca Morgan reports from this year’s Future of Design conference in Birmingham:

Good morning readers, I am Rebecca Morgan, helping you bridge any gaps in your memory of last month’s conference. The IABSE team have delivered another fantastic Future of Design conference, this time in the heart of Birmingham on Friday 12th April 2019.

The room was filled with current experts and with the young experts of the future. IABSE conferences are well known for bringing you bridge updates that you can truss – the suspension was killing me – but IABSE covers all structures, not just bridges. The conference included world leading figures in engineering, architecture, design, development and research.

Ian Firth, the IABSE British Group Chair, had the pleasure of introducing the conference. He focused on the international reach of the organisation stating that, unlike many institutions, IABSE offers the ability to network on a global scale.  He thanked the organisers before handing over for the first session.

Angus Low, a consultant to Arup, provided a talk called “No more Pile Caps”. Pile caps can be replaced by three piles inclined at 4°, or by single piles that have been under reamed or base grouted or tapered. This has the potential to save the construction industry around £500 million per year. All it requires is a little investment to modify rigs for inclined piles. Perhaps robots could be used to inspect or scan the under reamed piles. Removing a pile caps has the following benefits: reduced costs, greatly reduce carbon footprint, greatly reduce construction time, cleaner sites and safer sites with fewer excavations.

David Collings from Arcadis was next to speak with a talk on “Opening Bridges, Iconic and Efficient”. He focused on the three opening mechanisms: swing, bascule and lifting bridges. He showed how counterweights are used to reduce the power requirements. How bascule bridges often require large foundations and how the mechanical features can be hidden within the towers. He discussed the balance between structural robustness, mechanical efficiency, aesthetics and the available budget.

Sunil Johal from Argent spoke about the topic “Cities of the Future”. If people were dispersed equally, we could each have 5 acres of land to ourselves. With rapid population growth, more people are deciding to live in cities. So how can we make these cities more suitable for their humans? Here in Birmingham some of the major roads have severed communities. He gave the example of the motorway park in Seoul where urban space has been reclaimed for the benefit of the pedestrians. With encouragement to keep pushing for human centred design.

Cezary Bednarski from Studio Bednarski began with the presentation: “Life is a Bridge, Cross it but Build No House on it”. This talk covered a wide range of bridges with homes, mills, shops and other structures added to them, both historic and proposed. Some of the inhabited bridges covered by this talk included Old London Bridge, Ponte Vecchio, Pont Notre-Dame, Château de Chenonceau, Ponte di Rialto, Allahverdi Khan Bridge and the Chengyang Bridge. It ended with him “living up to his reputation” by suggesting a “love bridge” that earned money from its clients.

Neven Sidor from Grimshaw provided a talk on the Birmingham HS2 station: “Curzon Street Station”. A key aspect of the design was to maintain connectivity and prevent HS2 from severing through Birmingham. He gave the advice: “don’t be afraid to kill your darlings”, which in this case meant scrapping a favoured design option that had proved to be inadequate. He discussed the honest and efficient design of the tied arch roof. The arch roof has contextual significance to mimic railway stations built by Victorians. He discussed how the design utilised natural light and a legible station layout.

Peter Chipchase from WSP provided a talk on “Long Span Structures”. He provided many examples of his designs. He revealed the design a full capacity stadium, which will seamlessly be converted into residential apartments for its legacy. Another project was a building roof that mimicked the ripples from a waterdrop in a pond. There were also designs for a modular stadium that could be easily constructed from three types of self-standing trusses. Additionally, he showed a stadium where the pitch will be mechanically lifted to become the roof of the building.

Workshop Sessions
After a networking lunch, we were separated into two groups for workshops.

Simon Blakeney from Arup led the Digital Workshop. This focused on virtual reality and augmented reality. Virtual reality included wearing a headset and interacting with a virtual world. In the workshop we were put in a virtual lab and interacted with the lab equipment. There is no interaction with the real world, so long as you didn’t accidently walk into a wall. Augmented reality is different as it overlays pictures or information on to what you see in the real world. Wearing a hololens, which looked a bit like sunglasses, we were able to create shapes that we could manipulate by reaching out to them.

Meanwhile, Ron Slade from WSP provided a talk for the Sketching Workshop. He emphasised that sketching is fun, and it is a skill that can be learnt. It is also one of the best methods of communicating, as sketching can offer unparalleled clarity when describing something. He presented the idea that “if you cannot draw it, then you cannot build it”. He showed many different styles of techniques from artists, architects and engineers. He also showed that sketching is a great method for processing thoughts and developing ideas. Often the hand can produce ideas that the brain couldn’t visualise alone. Some more advanced techniques included drawing cutaways, axonometric diagrams and staged construction sequences.

Young Designers Paper Presentations
Next, we had presentations from young designers. This year there were 34 separate paper submissions and we had the delight of listening to the top eight submissions.

Discussion Panellists: Future of Cities
The discussion panel was enthusiastically chaired by Antony Oliver. The panellists included: Anthony Breach from Centre for Cities, Abigaile Bromfield from Arup, Malcolm Davidson from WSP, Simon Delahunty-Forrest from Birmingham City Council, and our keynote speaker Sunil Johal. A shocking statistic stated that the productivity of Birmingham is below the national average productivity for the UK. They discussed how HS2 would help increase the productivity of cities like Birmingham and Manchester. Good infrastructure is the equivalent of a lifeline for a city. All the panellists advocated liveable cities with an increased focus on recreation and wellbeing. Several suggested a devolution of power to a city mayor.

Millan Martin from Vinci gave a presentation about “Digital Design Management”. He talked about incorporating BIM level 2 into a range of projects. He stressed the usefulness of a Common Data Environment for information management. BIM can be used for clash detection, 3D modelling, volume calculations, 4D design sequencing and producing handover documentation. A fully coordinated, central source of information leads to better collaboration. On his example projects the highways engineer, the drainage lead, the town planner, the client, and the contractor were all able to hold a design meeting, without the use of any printed 2D drawings. Instead they worked through the 3D model on the computer.

Tristram Carfrae from Arup spoke about “Gaudí’s Sagrada Familia in the Making”. He revealed the massive undertaking due to the sheer scale of Gaudí’s design. When completed it will be the tallest church in the world. Part of the challenge was that the Mary tower sits atop a foundation that was meant for a much smaller church. However, there are fantastic possibilities available when the client, the contractor and the designer are all motivated to build to the highest quality. Tristram was able to prove that the Mary tower could be constructed with post tensioned stone panels, instead of a lighter steel knockoff. The team’s communication benefited from sketches, computer models and physical scale models.

Closing Address
The closing address and awards were concluded by Ian Firth. Ian talked with excitement about motivating the young people that will be the designers of the future. With a recommendation that everyone should sign up for IABSE membership. The networking drinks reception followed with plenty of debate about the days talks.

To round of the fabulous event many of us treated ourselves to a three-course meal with a live band. I must say, my vegetarian food was exquisite. Thanks again to the committee who arranged this fantastic event.

Manchester will be hosting Future of Design 2020, so please get in touch if you want to help organise next year’s event.

Many thanks from Rebecca Morgan.