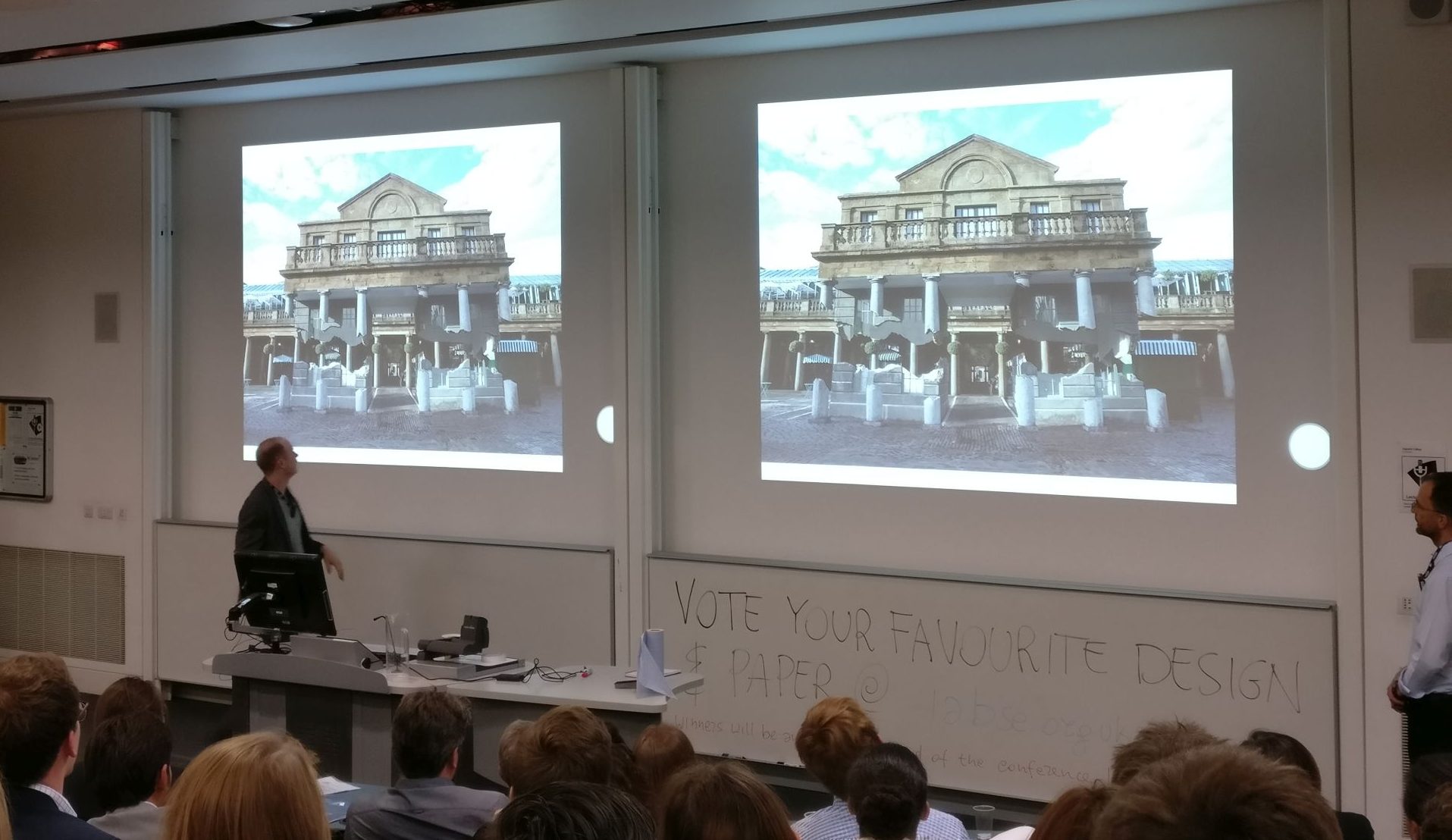 On September 8th 2016, built environment professionals gathered for the 10th IABSE British Group Future of Design event in London. Aimed at promoting innovation and collaboration to young designers, attendees were treated to a day full of inspiration, creativity and discussion.

Linda Miller opened the floor with her energetic and inspiring ‘Crossrail – Moving London Forward’ presentation. Speaking candidly on the attributes of future engineers and leaders; “be bold, unstoppable, hard-working, optimistic, resilient and out-reaching!” Adventurously Kamran Moazami followed sharing his new eye-catching presentation style on the structural engineering behind the next two tallest buildings in London. Emphasising that design is all about collaboration to create a great space which is economical, aesthetically pleasing, constructed quickly and designed from inside-out.

Roger Hawkins took the audience through a brief history lesson; “architects were all male and pale.” He then focused on the realism of architecture; from the challenges of changes in stakeholders through the design phase to the shear scale of collaboration involved in projects. “Today’s reality is different than traditional ways of design!” Roger suggested that the future of architecture will be working with existing buildings and promoting sustainability; requiring new ways of overcoming the challenges. He finished off by inspiring us all to promote and become advocates for good design – “design affects everything we do.”

“The best idea wins…it doesn’t matter where it comes from.” Andy Coward presentation focused on his experience behind the design of Tocumen and Mexico International Airport where up to 30cm of settlement can occur per year! Naeem Hussain discussed ‘The Art of Bridge Design’ and pointed out that the best way to design is over a few bottles of wine! He concluded that bridges should be enjoyable, easy to maintain and “we must respect the client’s budget.”

“Once you’ve got your geometry, you’ve locked yourself in. There’s only so much efficiency you can achieve.” Bill Baker’s talk focused on challenging the audience to question geometry and the way of design. “Design the load path….modify the force diagram and work backwards” was his advice. Having worked on a wide array of projects, Bill recognised that there has been a fundamental change in the way engineers design. Previously, engineers asked what shape will work, and today they ask how to make the shape work.  He encouraged young engineers that “an architectural sketch should be treated as a question and not a solution. Design is not black and white.” Suggesting that the use of digital analysis tools should be used to gain an insight into structural behaviour and not only produce the numbers!

Twelve young designers presented their papers and “floating” pylon designs to the floor. David Nethercot, Roman Przepiorka and Alex Chinneck were the judges for each session, in addition to the audience voting for their favourite. For the paper competition the judges’ winner was Simon Lamont presenting on ‘Mitigating the Risk of Excitation.’ Yidu Bu won the audience vote – “If you are the warriors, I am the weapon maker!”  Fantastic presentation skills were display by Matthias Ludin, Finn Graham and Sergio Vittorino who were the judges’ winning team in the pylon completion. It was great to see the design and construction thought process by Roger Faires, Ranulph Marshall and Owen Mitchell who won the audiences’ vote.

Professor José Torero Cullen began with defining terms – “each of us use the same words but not with the same meaning.” Following on to asking some thought provoking and interesting questions – “do we need to rethink competence?” His talk focused on the attributes and skills of the designers and directors as the process of designing is increasingly becoming more complex. Duo Alex Chinnek and Simon Smith entertained the audience whilst explaining the principles behind creative and inspiring engineering art sculptures. Named as ‘The Bridge-man’ Professor Enzo Siviero had the audience roaring with laughter with his amazing and hilarious examples of bridges linking them to emotions, culture and people! “I always say if a bridge was a woman I could marry it!” What an end to the conference!

The evening dinner was held at the Rembrandt Hotel in Knightsbridge with an excellent band live performance! It was fantastic to have the opportunity to mingle in and network in such a brilliant environment. The event was a fantastic success; so a big thank you to the faces behind the scenes; Najwa Jawahar, Nicoletta Galluzzi, Filip Kirazov, Matthew Coombes and Francesco Mazza Pungetti, the sponsors, the inspiring and thought-provoking speakers and those who attended.