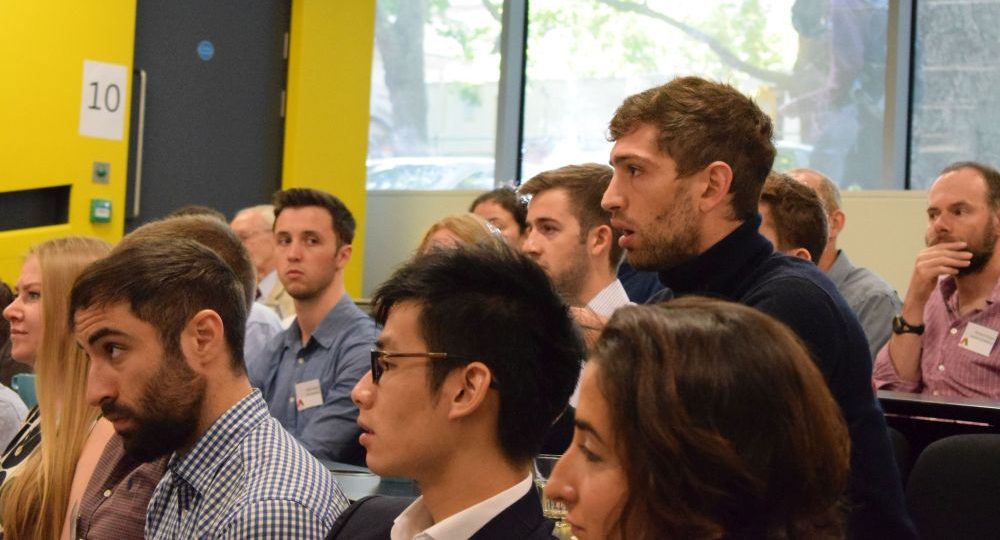 The 11th Future of Design Conference took place on the 15th September at Imperial College London, an event aimed and inspiring young engineers and promoting good design. The familiar format was adopted featuring a core programme of keynote speakers and young designers pitching their work to the audience. Knight Architect’s Tom Osborne warmed up the audience with an the opening address before chairing the first session.

Photos from the day can be found on the IABSE BG Flickr https://www.flickr.com/photos/iabsebritishgroup/albums/72157685311498032

Toby Allen of Elliot Wood opened with a talk on the next crossing across the Thames: The Rotherithe Bridge. The talk touched on the need for the bridge and the technical aspects of it, in particular the bascule design and the challenges they have faced so far. Mike Cook of BuroHappold Engineering talked on the human aspect of design, and the importance of engineers remembering key principles: Inspire, be sure, be bold and educate. His talk resonated with many of the other speakers as it was referenced throughout the day.

The next set of speakers came from a very different area of the built environment and provided great insight into some of the cutting edge work being carried out. Shajay Bhooshan of Zaha Hadid Architects talked about parametric design and in particular the example of the Science Museum installation where floor plans could be modelled parametrically and the user data could feed into the design process. It was a great example of automation in design and the use of data to inform design. Lisa Rammig of Eckersley O’Callaghan showed the development of glass connections and the progression E’OC have made to making glass connections transparent inclusing the use of structural silicone. The talk gave a great insight into the benefits of Research and Development, a part of our industry that is perhaps not used enough within engineering firms.

A new addition this year was a networking event that aimed at mixing the delegates up into groups they would not usually encounter. Groups were made from a diverse range of experience, ages and companies. The event kicked off with a quick icebreaker before diving into discussion on topics such as “Does university kill creativity?” and “What is the biggest challenge to the built environment and how do we solve it?” The result was some really engaging and thought-provoking discussion that spilled over into lunch time and fuelled conversation well into the evening.

The design competition provided a stage for the shortlisted entrants to pitch their ideas to the audience with their designs of a refugee shelter. The paper competition demonstrated some very impressive work that was being conducted by young engineers; from moveable bridges to elastomeric bearings. The judges chose a winner based on the paper entries and the audiences picked a winner based on the presentations:

The penultimate block was rounded off with Anthony Oliver hosting the discussion panel, where the panelists (Mike Cook, Lisa Rammig, John van Leer and Caroline Tong | CH2M) were posed the questions: Automation in structural engineering: Sci-Fi or Reality? The discussion touched on whether we should totally ignore it or completely embrace it? The conclusion seemed to be in the middle, being able to automate the mundane parts of design to allow engineers to really focus on what is important. The human aspect of the design was a topic that was brought up again, and whether we as humans could ever be replaced by AI capable of engineering a solution that can design for quantitative outputs? The discussion was well curated by Anthony Oliver, who used the audience and kept the panellists on their toes.

The final block of speakers ranged from the humanitarian aspect of engineering and developing an affordable shelter to the benefits of strategic objectives and their importance in projects. John van Leer of Better Shelter took us away from parametric designs and long span bridges to show us how Better Shelter was formed, a working solution following the earlier design competition, and the impact it has made. Their path to success was not a simple one, and was a key reminder for young engineers that theirs will not follow a nicely mapped out linear projection. Maria Alvarez gave an insight to the benefits of managing a project properly and the impact it can have. This included an interesting comparison between High Speed 2 and a similarly sized rail project in Singapore. Professor Chris Burgoyne taught us to keep it simple, showing where structures can be needlessly complicated for the sake of being complicated; an important learning curve for any young engineer.

The day flew by in an instant and before we knew it we were being whisked away to the Millennium Gloucester for the evening dinner.

Thank you to all of our sponsors, supporters and volunteers:
BuroHappold, CH2M, COWI, Eckersley O’Callaghan, Tony Gee and Trimble for sponsoring the event. Our institutional supports at ICE and IStructE. To Imperial for allowing us to host the event on their campus. The IABSE Executive Committee, the Session Chairs and of course the delegates for attending.