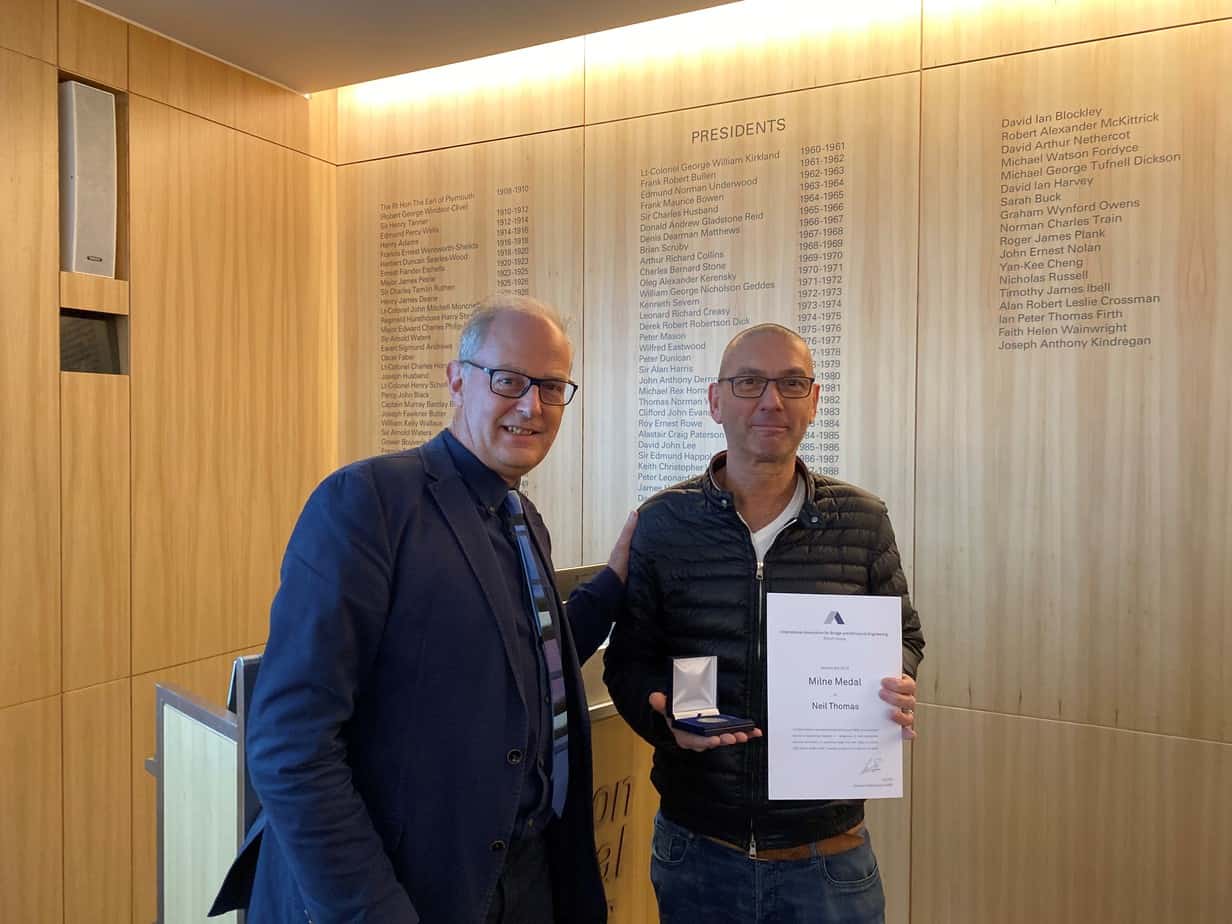 This year the IABSE Milne Medal award and lecture were held on the 12th of November at the IStructE HQ in London.

All shortlisted papers can be accessed here: https://iabse.org.uk/uncategorized/nethercot-prize-shortlist-2019/

This was followed with a brief introduction to the Milne Award by Ian Firth, where he emphasised the shared prerequisite of all the medal’s recipients: outstanding merit and contribution to the field of structural engineering. An emotional Neil Thomas was then presented with the Milne Medal in front of a cheering crowd.

Neil began his talk by reviewing different definitions for the term “Engineer”, using colourful sources such as the Urban Dictionary and Engineering: A Beginner’s Guide. By posing the question whether an engineer can be described as a magician, Neil set the scene for taking the crowd on the journey of his career. Presenting his collaborations with Marc Quinn on Planet and Anish Kapoor on Cloud Gate he alluded to the answer of this question.

Neil continued his story by deliberating on the different roles he has taken as an Engineer:

On another project with Marc Quinn, Neil learned how to create a rainbow. He described the process by defining the three things required: water, light and an observer.

In the Midwife role Neil worked on a plan where an old house was reinforced on the inside and then sprayed with concrete, once the concrete had set, the building around it was stripped away giving birth to a Ghost House in London’s Victoria Park.

On the Tarantara with Anish Kapoor, Neil had to devise the stability system of a 50m long membrane sculpture inside the Baltic Flour Mills in Gateshead. The sculpture was later folded, transported and erected in a public square in Naples this time using scaffolding as support. By comparing the sculpture in the two different settings, Neil illustrated the role of the context in our perception of light and weight.

For a feature of James May’s “Toy stories” Neil advised on the construction of house built from Lego.

Neil talked about his work in the rock ‘n’ roll industry, where he devises stages for bands such as Pink Floyd, The Rolling Stones and U2. Here he shared an interesting thought: “The rock ‘n’ roll industry is all about the team. If something breaks, someone goes and fixes it. In a building, if something breaks, someone writes a letter. It’s a very different approach.”

As a Conductor, Neil was involved in advisory work for the opening ceremonies of the London Olympics 2012 and the Sochi Winter Olympics 2014. He conveyed the two key messages he had learned through these experiences: “Money can’t buy you everything.” and “Bigger and better is not always best.”

Coming towards the end of his lecture Neil talked about the future. He raised the Climate Emergency topic and shared his research and interest in developing the use of sustainable materials, such as cross laminated timber (CLT) and bamboo. As a showcase of “the right direction forward” next to his own projects he noted AA’s Wood Chip Barn, John Hardy’s Green School and various timber works by Jörg Stamm. Neil also stated his and Atelier One’s intent to reduce the amount of materials in the touring structures they design. To conclude the talk Neil dedicated the award to Aran Chadwick – his partner at Atelier One, and thanked the rest of the Atelier One  team (most of whom where in the crowd) for their devoted efforts.

We would like to thank Neil for inspiring us all with his work and wish him to carry on undertaking such dedicated and thought(provoking)ful projects!

Neil Thomas’ IABSE Milne Lecture was recorded and will be made available on the IABSE British Group website soon.